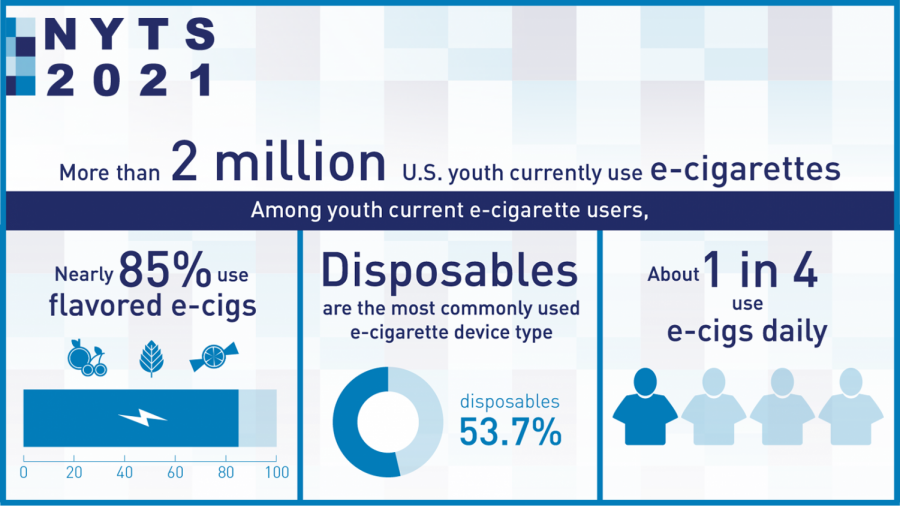 Most of us brush off the ads about how addictive and dangerous vaping is believing, ¨That will never be me.¨ But it could be.
According to the CDC, the use of disposable e-cigarettes has increased by 1,000% among high school students since 2019.
¨It’s extremely easy to get addicted to vaping almost easier than cigarettes,¨ says school resource officer John Everett.
Once you start, it’s nearly impossible to stop. Not only is it terrible for your health, but, according to Everett, if you are caught with a vape it could cause you to get in trouble with the juvenile office as it is not legal to use nicotine products until the age of 21. Additionally, there are many consequences outlined in the student handbook at school that can even result in OSS (out-of-school suspension).
One argument is that vaping is better for you than cigarettes, but that has yet to be proven. Michael Blaha, M.D., M.P.H. at Johns Hopkins Ciccarone Center for the Prevention of Heart Disease does say that it is bad for your heart and lungs because it still has nicotine.
Cigarettes were once considered good for our health until people presented with lung cancer years later. Since vape products were only introduced to the public in 2003 we have no idea what the lasting effects will be.
¨As of February 18, 2020, a total of 2,807 were hospitalized due to e-cigarette, or vaping, product use-associated lung injury,¨ according to the CDC.
Despite the lack of information about the long-term side-effects and the fact that it is illegal for high school students to use them, many students still choose to vape.
¨I’ve noticed an increase in the use. It’s just, it’s exploded. At least earlier on in the year, it was a larger number using than I´d ever seen and a larger number being caught than ever before,¨ says Everett.