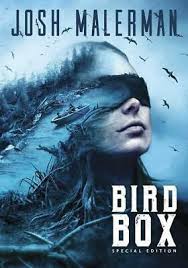 In December of 2018, Netflix original movie ‘Bird Box’ took the internet by storm. Memes abounded for a month or two, theory videos were circulated and criticized, and some of the population of ‘Bird Box’ enthusiasts drew attention to the book by Josh Malerman which they, of course, had read before the movie was even thought of.

Published in March of 2014, ‘Bird Box’ largely flew under the radar until the movie was made. It was Malerman’s debut book. Since the release and (later) success of ‘Bird Box,’ Malerman has written many more thriller and horror novels, a couple of which have been made into 9 or 11 minute short movies, neither as successful, of course, as the Netflix film.

After watching the ‘Bird Box’ movie, I expected to go into the 260-page book and read something completely different from what the Netflix adaptation portrayed, but was pleasantly surprised. A few scenes were added to the movie to increase the tension and extend the runtime, and a couple of rather gruesome details were left out of the film (like Olympia hanging from the attic window by her umbilical cord after giving birth). I was a little disappointed to see that Tom and Malorie’s relationship was left out of the book (or, rather, that the movie added that part in and the book left me hanging). Tom was instead a heroic character who Malorie depended and leaned on, citing him as the person who kept the house of survivors together.

As for the bird box the title promises us, it doesn’t have a very important or crucial role in either the movie or the book. The box had a screentime of perhaps 20 minutes, and in the novel it hung outside the house and scared the survivors living within, serving as a shoddy sort of alarm that, in the long run, didn’t really play a role in the story at all.

The movie ends just like the novel does, with Malorie, Boy, and Girl arriving at the School for the Blind. Boy and Girl get their own names, and the battered family is safe at last. My favorite thing about the novel and movie adaptation is that they both focus on Malorie’s struggle with motherhood in this new world. Malorie thinks about her questionable parenting a lot in the book, and she believes that she’s a bad mother, helping her children survive using cruel methods, even though there really wasn’t much to survive for.

Sometime in early 2020, Malorie’s story will continue with a sequel to ‘Bird Box,’ appropriately titled ‘Malorie.’ I, along with many fans of the first novel, hope that the second book will illuminate the monsters a little more, considering the fact that both the readers and the characters still have no idea what they are. However, part of me doesn’t want to know. Doesn’t not knowing what these battered and bruised heroes are facing make the thriller even more terrifying?