“Cry” by Cigarettes After Sex is the Music Form of Anesthetic 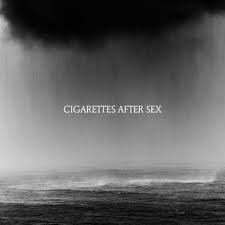 “Cry” is Cigarettes After Sex’s sophomore album after their self-titled which was released in 2017. The short 9-track album was produced and written by Greg Gonzalez, who is also the lead singer of the band. When listening to this entire album it gave off a numbing effect. It essentially sounds like depression melted into an audio form. Calm, simplistic, soft, slow and filled with sad lyrics of love, lust and loss.

Cigarettes After Sex’s style really reminds me of the early 2000’s track “Last Dance” by The Raveonettes, a song I remember deeply from my childhood because it was one preloaded onto an MP3 player my parents bought me and, looking at comments on the song, apparently that’s how most people found it too. The whole album “Cry” just sounds like the 2009 era of indie sad music, as well as sounding like The Neighbourhoods’ early music.

While I think this album is good, my one critique of it is the similarity in instrumental sounds. While the harmonies and melodies of the album switch enough to be distinct in their own ways, the instrumentals could’ve used some work. While on the one hand it is nice to have such a consistent album, on the other many people might get bored listening to it. Every song begins with the same synth sound, blues electric guitar pumped full of reverb, soft ticking jazz drum beat, soft vocals, and a total runtime of a little over four minutes. The only thing that really differs from track to track is the lyrics and chords. If I had to make any suggestion to fix the album though that would probably be it.

Some things I love about the album, however, is the voice of the lead singer Gonzalez. It is rare to hear a grown man’s singing voice being so intensely soft. He sings almost in a whisper the whole way. The best way I could describe it to somebody who has never heard them before would be a male version of Lana Del Rey. Very soft, very smooth, singing almost in a lullaby.

Obviously with almost any album there will be songs that stick out and songs that don’t. Whether it’s for a good reason or a bad one. On this album while it still sounds similar the whole way there are multiple tracks that really stuck out to me. I would say my favorite off the album would be the second track “Kiss It Off Me” which very much sounds like a song that would be made by a band with such a name as Cigarettes After Sex. The chord progression of this song gives such a melancholic vibe and the chorus melody definitely leans into the nostalgic factors. Overlaying all of this though is Gonzalez’s smooth voice dragging sadly across the soft guitar chords, lamenting about meeting his lover in a peach baseball cap. Begging her to leave all of the “rich f***boys” she dates and go for him instead. While seeming like a classic – and cringey- “I’m a nice guy” approach, he says it so softly and romantically it almost sounds sweet.

“Heavenly”, the track directly after “Kiss It Off Me” is another one to remember. From the building verses to the soft and catchy chorus of the track, to the strange way he says kiss, this track is one that I fell in love with the moment I heard it. While still sounding similar to many of the other tracks off this album, it does give a nice switch-up in the chorus of the staple synth sound, giving it a more vocal sound. To give last small shout out to some of the more memorable tracks off this short album I would have to recommend “Pure”, “Falling in Love”, and “Cry”.

In conclusion, the entire album to me is mostly a success. While it might sound similar on many tracks, it gives an overall numbing, beautiful, slow, melancholic feeling. I recommend this album especially if you’re a fan of underground indie music because if I had to define this album by any genre, it would be that. My last comment though is that if the album had more diversity to it, I would’ve loved it even more.